Trekking through the Sawtooths

For many years I’ve been longing to visit the Sawtooth Range in Idaho, and last week I finally got the chance! We went on a 7-day backpacking trek through the range, starting from Pettit Lake and ending at Redfish Lake, taking a few detours along the way. The Sawtooths did not disappoint, with their seemingly endless supply of emerald lakes surrounded by jagged granite spires.

Not seen in these photos are the swarms of mosquitos everywhere. Those pesky bastards would not leave us alone! We hiked up to this ridge mainly just to escape the mosquitos at the lake we were camped at; but they were up on the ridge too! Thank heavens for deet.

The first few days we had beautiful partly cloudy weather, but the next few days were totally sunny – great for trekking but not so great for photography. Nevertheless we had a blast backpacking through this new mountain range, jumping in the lakes, and camping in some of the most spectacular campsites ever.

During our trek here in early August, about 15 minutes or so after sunset every night there was about 5 minutes of the most brilliant magenta rays that illuminated the western sky.

We spent a day hiking to an unnamed lake (above) that I was totally curious to see, since it is situated in a remote cirque below a wild array of jagged spires. We planned on staying the night here, but I totally underestimated the difficulty of the bushwhack required to get here, and we realized that the only way to keep on our trek schedule was to abandon our plan and immediately leave and return to the camp from the night before. Thus, we spent most of a day doing a fairly grueling bushwhack with full packs for no reason, when we could have had a chill rest day instead. D’oh! Well, Claudia’s a trooper and she had a better attitude about it than I did!

Our last night was spent at one of the most incredible spots I’ve ever set up a tent at, on cliff about 20 feet above a lake, with a direct view of the huge Elephant’s Perch spire towering above!

The last day we hiked down to Redfish Lake and caught a boat ride across the lake back to the truck, ending another good long trek this summer! I hope to return to the Sawtooths again someday! 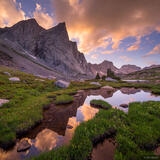 The Wild Heart of the San Juans
August 2012 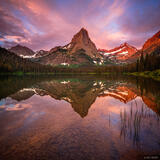 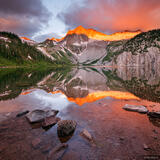