A Sunset and a Lion

By mid-October all the aspen leaves have fallen and the color is gone from the mountains. Nevertheless, on Thursday afternoon last week, with clear air and a sky full of high clouds I decided spontaneously to go for a big hike to watch the sunset from the top of a 13,500 foot peak high above the town of Telluride. When the sun dipped below the horizon, the clouds lit up with brilliant colors which in turn illuminated the mountains with a sensuous orange glow. The light was so rich and warm I almost forgot about the frigid breeze and my frozen fingers. I guess the color wasn't gone from the mountains after all, at least during this evening's amazing light show.

This time of year in Colorado the days are getting shorter and it gets dark really quickly after sunset, especially when there's no moon like on this night. The route I took up this peak wasn't exactly straightforward - a series of old faded trails winding sporadically across tundra slopes between steep terrain. On the way down via headlamp in the pitch black darkness and without any clear trail to follow, I was guided solely by the gps topo app on my phone. Though I'm no stranger to hiking in the dark, it was a little bit nervewracking on this night's hike to realize my complete reliance on one single electronic device. Fortunately I had kept my phone warm in my down jacket the entire time on the summit; otherwise in the cold air the batteries may have quickly drained, and my journey down the mountain could have been a tiring and potentially dangerous guessing game of navigation in the dark.

I suppose this is the double edged sword of technology in the wild. The topo app successfully and easily guided me down the mountain in the darkness (which otherwise I likely would not have even attempted without a clear route or trail). But to put total dependence and faith on this one little device is a precarious position to be in in the wild. It worked out just fine this night, but I think the takeaway for me in this type of situation is to always have a backup - in this case at least a battery charger for the phone (I did have a backup battery for my headlamp). A physical map wouldn't have helped much in the dark, but would still have been better than nothing.

I made it back to my car without incident, but the excitement wasn't over yet! On my way down Red Mountain Pass driving back down towards Ouray I came around a corner and saw ahead on the road what looked like a stray dog, perhaps like a golden retriever? My first thought was "Oh jeez, now I need to deal with trying to rescue someone's lost dog!" A moment later, I realized that's no dog - thats a MOUNTAIN LION. I quickly grabbed my phone to see if I could catch it on video. Here's what happened at that point:

I thought this was a really amazing and rare encounter and so I'm eager to share the video, but I realize that without any context it looks like I'm purposely chasing the lion with my car. I want to assure you this was not the case at all.

To give some important context to the video, at this part of the road there was a steep dropoff on the left, and sheer cliffs on the right. That's why the mountain lion had nowhere else to go but to run down the road in front of my car! I did not want to stress the lion and continue to force it down the road, so I sped up and passed it fairly quickly. Some people on social media asked why I didn't stop and let it run off - it's an understandable question, and honestly I think that if I had stopped and waited, the encounter could have just dragged on longer (keep in mind, again, that there was no place for the lion to go but down the road!). So either I wait and perhaps slowly herd the lion down the road for a long time, or I speed up and pass it to leave it alone in a hurry. In the moment my instinct was to pass by it quickly. The lion's fine.

This was my second mountain lion encounter of the year; at least this time I was safe in my car and not on snowshoes 20 feet away from a pack of them, which is what happened on New Years night last winter!

Posted in Colorado and tagged San Juan Mountains, Colorado.
← Previous: Autumn Gold Rush in the San Juans
Next: Into the Black Canyon → 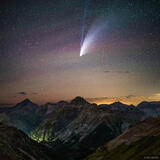