Spring Skiing in the San Juans

If you've followed my blog for a while, you may wonder if I've given up on snowboarding since I haven't posted hardly any ski/snowboard photos this winter. Well, while I haven't been posting much, I have been out on the snow a lot this season, especially this spring!

2018-2019 was a winter to remember in Colorado, with roughly 160% of average snowpack by late winter. The first half of winter through February was plagued by abnormally dangerous avalanche conditions. But in early March a series of huge storms dumped on the mountains causing an historic avalanche cycle, with many slide paths avalanching larger than ever seen before. The avalanches cleared out nearly every dangerous slope, leaving generally very stable late March and April conditions. With the stable snowpack and storms that kept coming through May, 2019 has turned out to be an exceptional spring ski season here in southwest Colorado!

Posted in Colorado, Skiing & Snowboarding and tagged San Juan Mountains, Colorado.
← Previous: Starlight on Sneffels
Next: Through and Around the Great Sand Dunes → 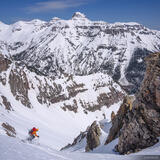 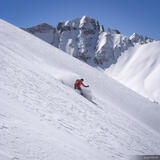