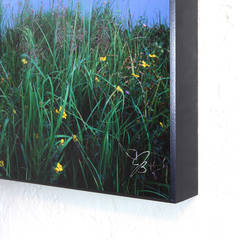 My most popular print display option, also known as "ColorBox" or "MegaPlaq". A fine art ink print with vibrant and accurate colors is mounted on eco-friendly HDF smooth wood and sealed with a special satin semi-gloss UV laminate, which protects the print and eliminates reflections while maintaining excellent image clarity and contrast. The mount is finished with a beveled 1"-deep black edge, resulting in an elegant, modern, and durable print display that hangs flush against the wall. (more info) 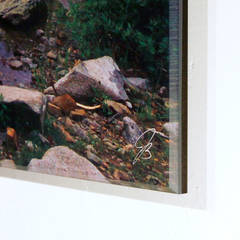 With this innovative display method, the fine art ink print on glossy metallic paper is professionally mounted face-first onto 3/16" museum-grade, UV protected, scratch-resistant plexiglass, and backed by 1/8" black acid-free board. An inset french-cleat hanging system is attached to the back, so that the print floats 1/2" off of the wall, appearing like a glass framed print is floating on the wall, but without the mat and frame. This is the option for those who desire the ultimate stunning glossy print image quality. (more info)

Unlike all my other options which involve mounted paper prints, this attractive display option uses a dye sublimation technique to infuse the image onto a thin, rigid aluminum sheet with an ultra glossy finish. The result is a luscious display of deep, bold colors with excellent clarity and high contrast. The aluminum print is mounted on a 1/2" deep recessed float frame, so the print appears to float off the wall with no hanging system visible. (more info)

This is the option if you want a fine art print to have matted and framed yourself. Printed with pigment inks on archival heavyweight Hahnemühle Baryta paper, these prints have a semi-gloss surface and gorgeous, vibrant colors. The print is delivered without mounting or framing, so you'll need to handle it with care and take it to a local framer to have it matted and framed as you'd like. (more info)

Not sure which display option to order? This might help.

* Free shipping for all U.S. orders!

Please allow 3-4 weeks for production and delivery time, though prints are often shipped sooner than that.